Kēdārnāth Mandir (Kedarnath Temple) is a Hindu temple (shrine) dedicated to Lord Shiva (Mahadeva). Located on the Garhwal Himalayan range near the Mandakini river, Kedarnath is located in the state of Uttarakhand, India. Due to extreme weather conditions, the temple is open to the general public only between the months of April (Akshaya Tritiya) and November (Kartik Purnima, the autumn full moon). During the winters, the vigraha (deity) from Kedarnath temple is carried down to Ukhimath and where the deity is worshiped for the next six months. Kedarnath is seen as a homogenous form of Lord Shiva, the 'Lord of Kedarkhand', the historical name of the region.

The temple is not directly accessible by road and has to be reached by a 22 kilometres (14 mi) uphill trek from Gaurikund. Pony and manchan service is available to reach the structure. According to Hindu legends, the temple was initially built by Pandavas, and is one of the twelve Jyotirlingas, the holiest Hindu shrines of Shiva. It is one of the 275 Paadal Petra Sthalams, expounded in Tevaram. Pandavas were supposed to have pleased Shiva by doing penance in Kedarnath. The temple is one of the four major sites in India's Chota Char Dham pilgrimage of Northern Himalayas. This temple is the highest among the 12 Jyotirlingas. Kedarnath was the worst affected area during the 2013 flash floods in North India. The temple complex, surrounding areas, and Kedarnath town suffered extensive damage, but the temple structure did not suffer any "major" damage, apart from a few cracks on one side of the four walls which was caused by the flowing debris from the higher mountains. A large rock among the debris acted as a barrier, protecting the temple from the flood. The surrounding premises and other buildings in the market area were heavily damaged. 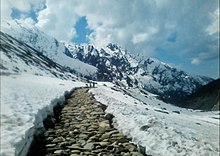 The temple was included in the Uttar Pradesh State Government Act No. 30/1948 as Act no. 16,1939, which came to be known as Shri Badarinath and Shri Kedarnath Mandir Act. The committee nominated by the state government administers both temples. The act was modified in 2002 by the Uttarakhand State Government, which provisioned adding additional committee members including government officials and a vice-chairman.[17] There are a total of seventeen members in the board; three selected by the Uttarakhand Legislative Assembly, one member each selected by the District Councils of Chamoli, Pauri Garhwal, Tehri Garhwal and Uttarkashi districts, and ten members nominated by the Government of Uttarakhand.[18] On the religious side, there is a Rawal (chief priest) and three other priests: Naib Rawal, Acharya/Dharmadhikari and Vedpathi.[19] The administrative structure of the temple consists of a chief executive officer who executes the orders from the state government. A deputy chief executive officer, two OSDs, an executive officer, an account officer, a temple officer and a publicity officer assist the chief executive officer. 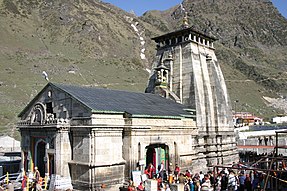 The presiding image of Kedarnath in the form of lingam is of irregular shape with a pedestal 3.6 m (12 ft) in circumference and 3.6 m (12 ft) in height. There is a small pillared hall in front of the temple, that has images of Parvathi and of the five Pandava princes. There are five temples around namely Badari-kedar, Madhya Maheswara, Tunganatha, Rudranatha and Kallesvara.[13] The first hall inside Kedarnath Temple contains statues of the five Pandava brothers, Lord Krishna, Nandi, the vehicle of Shiva and Virabhadra, one of the guards of Shiva. Statue of Draupadi and other deities are also installed in the main hall.[1] An unusual feature of the temple is the head of a man carved in the triangular stone fascia. Such a head is seen carved in another temple nearby constructed on the site where the marriage of Shiva and Parvati was held. Adi Shankara was believed to have revived this temple, along with Badrinath and other temples of Uttarakhand; he is believed to have attained Mahasamadhi at Kedaranath. Behind the temple is the samādhi mandir of Adi Sankara.

The head priest (Raval) of the Kedarnath temple belongs to the Veerashaiva community from Karnataka. However, unlike in Badrinath temple, the Raval of Kedarnath temple does not perform the pujas. The pujas are carried out by Raval's assistants on his instructions. The Raval moves with the deity to Ukhimath during the winter season. There are five main priests for the temple, and they become head priests for one year by rotation. The present (2013) Raval of Kedarnath temple is Shri Vageesha Lingacharya. Shri Vageesh Lingacharya who belongs to the Village Banuvalli of Taluka Harihar of Davanagere district in Karnataka. A triangular shaped lingam is worshiped in Garbhagriha of the temple. Surrounding Kedarnath, there are many symbols of the Pandavas. Raja Pandu died at Pandukeshwar. The tribals here perform a dance called "Pandav Lila". The mountain top where the Pandavas went to Swarga, is known as "Swargarohini", which is located off Badrinath. When Dharmarāja was leaving for Swarga, one of his fingers fell on the earth. At that place, Dharmarāja installed a Shiva Linga, which is the size of the thumb. To gain Mashisharupa, Shankara and Bheema fought with maces. Bheema was struck with remorse. He started to massage Lord Shankara’s body with ghee. In memory of this event, even today, this triangular Shiva JyotirLinga is massaged with ghee. Water and Bel leaves are used for worship.

How to make Bread Pakora?...